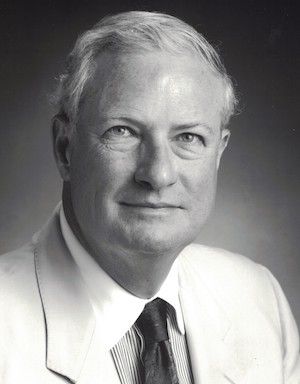 Born and raised in Kitchener, Ontario, John Pollock attended Ridley from 1952 to 1955. He then obtained a Bachelor of Applied Science degree from the University of Toronto where in his final year he became the president of the Alpha Delta Phi local fraternity. John later obtained a Master of Business Administration from Harvard University in Boston.

In 1972, John succeeded his father as president of Electrohome, a Kitchener-based electronics company founded by his grandfather in 1907. He started as an assistant sales manager, then product manager, followed by general management, vice-president, president and then chairman of the corporate board of directors. John purchased one of the oldest broadcasting stations in Edmonton, Alberta from Dr. Rice, one of the early broadcasters in Canada. This added to Electrohome’s long-time ownership of television and radio stations in Kitchener.

Electrohome is credited with being one of the first high tech companies in the Kitchener-Waterloo Region. From 1972 to 2008, John led the company in developing a number of different electronic products including specialized data displays stock exchanges, large-screen projection television systems, reverse osmosis/water ultrafiltration systems, and custom TV monitors for many leading video games manufacturers in the U.S. In 1996, he merged CKCO-TV with the company’s other broadcasting properties with Baton Broadcasting. In 1997, Electrohome sold all of its interest in broadcasting to the CTV Television Network.

John has served on the boards of numerous companies including ThyssenKrupp Budd Canada Inc., Canadian General-Tower Ltd. of Cambridge and S.C. Johnson and Sons Ltd. in Brantford and was also active in many non-profit organizations, serving as a trustee with the Art Gallery of Ontario and as a board member with the Cambridge Memorial Hospital, the Grand River Conservation Foundation and Junior Achievement of the Region of Waterloo. He was a member of the Advisory Board of the University of Western Ontario, the Board of Directors of the University of Waterloo, the Science Council of Canada and the Trillium Foundation of Ontario. He has also served as chairman of the Kitchener-Waterloo Art Gallery and St. John’s-Kilmarnock School. He was the seventh chancellor of Wilfrid Laurier University, and held this position from March 31, 2008 to October 28, 2011. He has received Honourary Doctor of Laws degrees from both Wilfrid Laurier University and the University of Waterloo.

After graduating in engineering at the University of Toronto, John worked for six months at the T. Eaton Company where he sold boats, small appliances, stereo and television receivers where he became on of the better salesmen of Electrohome branded products and Eaton’s Viking brand that Electrohome manufactured on a private label basis.

The following year, John travelled on his own through Asia, joining a group from Canada touring China as one of the early visitors following the second world war. At a rally in Shanghai where forty thousand people were present, this group of Canadians was accommodated on a raised dais at the front of the crowd and witnessed the hanging of Eisenhower in effigy due to the downing of a U.S. spy plane piloted by Gary Powers. He continued through southwest Asia to Calcutta, India where he visited the foothills of Mount Everest. After spending some time in central Asia, he received a letter from home indicating he had been accepted at the Harvard Business School.

From northern India, he travelled through Pakistan, Afghanistan and Iran. From Damascus, he went overland to Cairo, where he stayed in King Farouk’s cook boat at $5/day, slightly less than the $15/day cost that was spent in addition to his plane ticket that had to be retyped by hand with every change prior to electronic updating by the airlines. He then went south to the Valley of the Kings and then through Europe and back to Canada. On a subsequent trip he continued his interest in mountain climbing by reaching the peak of the Matterhorn in Switzerland.

While at Harvard, John met Joyce Smethurst who was attending the New England Conservatory in Boston and they moved to the Kitchener-Waterloo area where they had four children, three girls and a boy, all of whom attended Ridley at one time or other. Forty-four years ago, he and his wife purchased fifteen acres that contained a one hundred-plus year-old mill in the village of Blair, a suburb of Cambridge, where they presently reside.