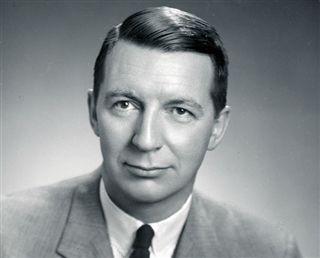 During the Second World War, Coyne served in the Royal Canadian Air Force. From 1944 to 1949, he was executive assistant at the Bank of Canada and, from 1950-54, was Deputy Governor. He was appointed Governor in 1955 and resigned in 1961.

The Coyne Affair, or the Coyne Crisis, was a public disagreement between the government of John Diefenbaker—notably, Finance Minister, Donald Fleming—and the Governor of the Bank of Canada. As Governor, Coyne heavily criticized the government's fiscal policies, in which the Diefenbaker government spent and borrowed heavily in an effort to stimulate growth amid a flagging economy. Government officials urged Coyne to lower interest rates and create economic activity. Coyne disagreed, arguing that loose-money policies were creating a debt crisis and that Canada was relying too much on capital exports and loans from the United States and that a tightening was needed. In speeches and brochures, he criticized the government's expansionary policies. The government took the position that an elected government, especially one elected with a large mandate, should direct monetary policy.

Matters came to a head when Coyne raised his own pension to $25,000, which Diefenbaker deemed excessive when he himself had no entitlement to one. The Conservative majority in the House of Commons passed a bill declaring Coyne's position vacant, but the Liberal-controlled Canadian Senate rejected it. Nevertheless, Coyne resigned the next day.

For his role in this controversy, the Canadian Press named him Canadian Newsmaker of the Year in 1961. In 2012, he was made a member of the Order of Manitoba. Coyne died in 2012 at the age of 102.