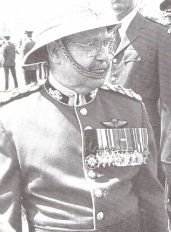 Heaman was a boxer, gymnast, cadet lieutenant, and Prefect. After Ridley he attended McGill University, but the Second World War interrupted his studies—and his subsequent military career earned him the U.S. Silver Star and Purple Heart. After the war, Heaman completed his degree after and joined his brother in a successful business operation, the Heaman Paint Company of London.

Heaman took the position of secretary of the Ridley College Old Boys Association and in 1967, became secretary of the Ridley College Foundation. He was instrumental in the creation of the annual giving programme and in the development of class agents. Over the years, he revamped Ridley's Tiger magazine to become the voice of the school and its family. He possessed a remarkable memory for names and faces, and was the official greeter for new students in September and for alumni on Association weekends.