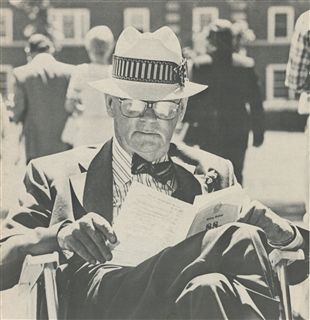 Terry Cronyn spent most of his life at Ridley, first as a student from 1911-20, and returning as a master from 1927-67. He taught, housemastered, advised, edited publications, and wrote and directed plays until 1945. He was then called upon to be the first professional secretary of the Ridley College Old Boys Association. The governors agreed to provide both a residence and office for him in the school.

For twenty years, Cronyn developed the Association: compiling and renewing its membership, reporting on its members' careers and achievements, organizing its occasions, and binding its life to the School. He created The Ridley Tiger, a publication of school news. He attended every possible occasion, remaining in residence after his retirement in 1967 and beoming, unobtrusively, "Mr. Ridley" for the rest of his life.

Cronyn remained a strong supporter, reliable friend and welcoming host of the school. He held no appointed position but exercised enormous influence. His death in 1983 left an irredeemable loss.