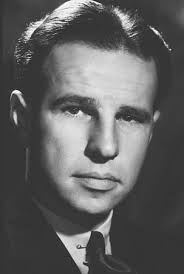 Hume Cronyn came to Ridley in 1921, the smallest boy in the school and, preceded by five Cronyns, he had much to live up to. Hume learned to box and won a shield—the first of six—in 1925. His boxing prowess earned him a nomination to the 1932 Canadian Olympic team.

While attending McGill University, Cronyn switched majors, from pre-law to drama, and continued his acting studies under Max Reinhardt and at the American Academy of Dramatic Arts. In 1934, he made his Broadway debut as a janitor in Hipper's Holiday and soon became known for his versatility, playing a number of different roles on stage.

He won a Drama Desk Special Award in 1986. In 1990, he was awarded the National Medal of Arts. His first Hollywood film was in Alfred Hitchcock's Shadow of a Doubt (1943). He later appeared in Hitchcock's Lifeboat (1944) and worked on screenplays, Rope (1948) and Under Capricorn (1949). He was nominated for an Academy Award for best supporting actor for his performance in The Seventh Cross (1944) and won a Tony Award for his performance as Polonius opposite Richard Burton's Hamlet (1964). Cronyn bought the screenplay What Nancy Wanted from Norma Barzman—later blacklisted with her husband Ben Barzman—with plans to produce the film and star in it with his wife, Jessica Tandy. However, he sold the screenplay to RKO, which later filmed it as The Locket (1946).