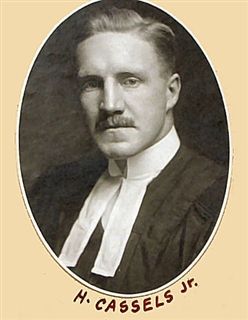 ‘Laddie’ Cassels was one of the great heroes in the early Ridley story and a giant on the Ridley scene for his entire life. He was a student from 1907-13, saw action in both World Wars, was chosen president of the Old Boys Association in 1924, and elected to the Board of Governors in 1936. He served as president from 1963 through 1967.

His leadership abilities become very apparent during his time at Ridley as captain of both the hockey and football teams, Prefect, commanding officer of the Cadet Corps, and winner of the Blake Proficiency Prize and the Mason Gold Medal. After the First World War, Cassels became a lawyer and a Life Bencher of the Upper Canada Law Society.

He was a keen sportsman and had the unique experience of coaching the University of Toronto Varsity team in the 1920 Grey Cup final when they defeated the Toronto Argonauts—the team for which he had played the previous week! In the 1960s, he was the inspiration behind and chief benefactor to the fledging Ridley rowing program. He had a truly abiding love for the school. Cassels died in 1973.