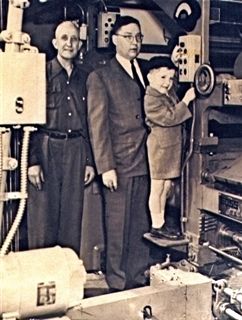 The Burgoyne family has been prominent in St. Catharines for four generations, and an integral part of the Ridley community for nearly as long. Henry B. Burgoyne was one of Ridley’s veteran governors. As president and publisher of The St. Catharines Standard, and head of such organizations as the Henley Aquatic Association, the Chamber of Commerce, and the Canadian Association of Amateur Oarsman, he contributed greatly to the St. Catharines community.

Henry died in 1950. His son, William 'Bill' B.C. Burgoyne '37 attended the school for seven years and had a strong academic career. He later attended the University of Toronto where he earned a bachelor’s degree. He was active in the Second World War and returned home to succeed his father to the proprietorship of the newspaper.

Bill set the editorial policy at The Standard for twenty years. He achieved national recognition on three occasions by being elected the director of the Daily Newspaper Association. He was also Chairman of the Canadian section of the International Press Institute. He was very much involved in the local Anglican Church and was a strong supporter of rowing. Bill was chairman of the Centennial Regatta in 1967 and chairman for the World Rowing championships in 1970. His strong support of Ridley resulted in him becoming a governor in 1950.

He was particularly strong in his support of cadet activities; his local influence was decisive in easing Ridley into the St. Catharines rowing world. Bill died at a young age in 1970. His wife, Dorothy Burgoyne-Doolittle had a strong connection to Ridley throughout her lifetime, and 1979 saw the start of her special support of the female students attending the school.

Dorothy would host annual brunches for the female students—she had a genuine interest in their welfare. She also instituted the Dorothy Burgoyne Award for quiet leadership and integrity to a graduating girl. Dorothy was Ridley’s first female governor and a true patroness of the girls.

In 1988, Dorothy was vice-president of the Board of Governors, and they surprised her with the unveiling of a plaque naming Burgoyne House in honour of three generations of the family’s dedication to St. Catharines and Ridley. In 1997, another prize was donated in Dorothy’s name—this one honouring achievement in dance. When Ridley: A Canadian School was commissioned, Dorothy was asked to chair the book committee. In her forward, she concluded with, “As you can see, Ridley has been a part of my life for many years.”

Bill and Dorothy’s son, Henry B. Burgoyne '67 was also a wonderful supporter of the school and local community. While at Ridley, Henry had a very successful athletic career in harriers, gymnastics and diving. Henry took over as publisher of The Standard at the young age of 26, after the untimely death of his father. He became well-respected in the Canadian newspaper industry.

During Henry's years of leadership, the corporation grew to operate a chain of community newspapers. In 1985, his team of journalists won the national award for best investigative reporting in Canada. Henry was also an extremely active community volunteer, serving on numerous boards and charitable organizations. Dorothy died in 2010 and Henry in 2011.