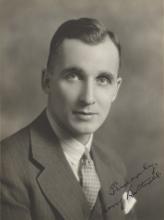 From 1936 to 1939, Dr. Botterell was a lecturer in Neurophysiology as the University of Toronto and Attending Surgeon of Neurosurgery at the Toronto General Hospital. He aided in the establishment of Lyndhurst Lodge for the care of paraplegics. In 1953, he became Head of Neurosurgery at Toronto General Hospital and held this post until 1962, when he accepted the position of Dean of Medicine at Queen’s University, which he held until 1970. He was also Vice Principal of Health Sciences from 1968-71.

During his career, Botterell pioneered many innovative developments in neurosurgery, including the use of hypothermia in brain surgery. He was also a well-known spokesman for the importance of universal public health care. In 1970, he was selected to be part of an External Advisory Committee (Selection Committee) for the next Headmaster of Ridley—the choice of which would have an enormous influence on the success or failure of the school. The Botterell Committee spoke with faculty, prefects and students and, after many meetings, they drew up an analysis of the type of person the school needed. Ultimately, they selected Richard Bradley to lead Ridley into its next phase. Botterell died in 1997.