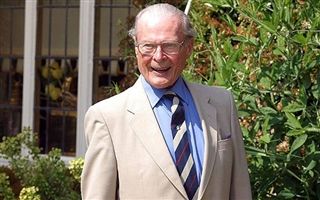 Henry Allen John, 8th Earl of Bathurst was a British peer, soldier and Conservative politician. During the Second World War, Ridley looked after sixteen English boys who had been evacuated to Canada. It is clear from the long term relationship developed with the school, that these boys were made to feel right at home when they arrived at Ridley, and have maintained themselves as part of the Ridley family.

In January 1974, the English Old Boys presented the “Bulldog Trophy” to Ridley’s squash programme, on behalf of those who had been given refuge during the war. On Association Weekend in 1989, a portrait of the original Bishop Nicholas Ridley was unveiled. This piece was commissioned by the United Kingdom Branch, and Bathurst was there in person to help with the presentation.

Bathurst's father had been killed in 1942, while on active duty during the Second World War and he succeeded to the family title in 1943 upon the death of his grandfather, the 7th Earl of Bathurst. He joined the military in 1948 and served in the 10th Royal Hussars and later the Royal Gloucestershire Hussars. He later held political office under Harold Macmillan as a Lord-in-Waiting (government whip in the House of Lords) from 1957-61, and as Joint Under-Secretary of State for the Home Department from 1961-62. He was a Deputy Lieutenant for Gloucestershire from 1960-86, following which he left politics to run the family estate based around Cirencester Park. Bathurst died in 2011.