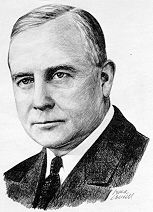 Born in Toronto, Ontario, ‘Casey’ Baldwin held prominent student leadership roles at Ridley, won the Blake Gold Medal and was captain of the cricket team. He graduated in 1906 from the University of Toronto with a degree in electrical and mechanical engineering and, that summer, left for Baddeck, Nova Scotia to visit the home of college friend, Douglas McCurdy and the famous inventor, Alexander Graham Bell.

On October 1, 1907—with the encouragement and generous financial support of Bell’s wife—Bell, Baldwin, McCurdy and two Americans, Glenn Curtiss and Thomas Selfridge, formed the Aerial Experiment Association with the expressed purpose to “get in the air.” Baldwin used his engineering skills to help build the Silver Dart plus several other experimental aircraft. On March 12, 1908 at Lake Keuka, New York, he became the first Canadian to pilot an airplane.

In the summer of 1908, Baldwin and Bell began discussing powered watercraft and building and testing various types before turning to the construction of an aircraft that could take off from water that the two called a “hydrodrome.” While the project was temporarily shelved, in 1919 Baldwin built the HD-4 hydrofoil that set a world water speed record of 70.86 mph on Bras d’Or Lake. However, the watercraft was not a commercial success and the HD-4 project was ended in 1921.