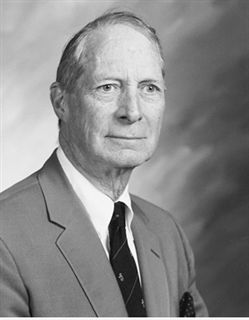 Sam Anderson was born in New York on July 28, 1926 and attended Ridley from 1940-44. His life was one of education, both as a student at Ridley, Harvard University, University of Paris, Columbia University, University of Massachusetts, and Middlebury College; and as a teacher at Hillfield, Choate, Taft, Ridley, and for 18 years at Phillips Academy-Andover. A WWII veteran, having volunteered at age 17 and served with the U.S. Navy in the South Pacific, he worked for Chase Manhattan Bank in New York and for the State Department as a diplomatic courier.

Anderson served Ridley for over 50 years as a student, member of faculty (1963-68), a founding trustee of the Ridley College Fund USA, Inc. (until 2005), a class agent and a member of the Board of Governors for 20 years (1979-2000). He established himself as a major donor through numerous capital campaigns, culminating in the establishment of the Chair for History and Modern Languages, a scholarship and a Book Fund all bearing his name. The reading room in the Matthews Library was named in Anderson’s memory in 2012. Upon retirement to Cape Cod, he served on the boards and committees of many volunteer organizations. Anderson died at Cape Cod, Massachusetts on January 22, 2011.