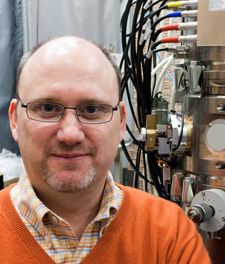 Ian Anderson is a highly respected scientist in his chosen field of physics. His research interests are the development, evaluation and application of techniques for determining the structure and composition of matter at or near atomic spatial resolution.

After attending Ridley, Anderson earned a B.S. in Applied Physics from the California Institute of Technology (1985), then went on to earn an M.Eng. in Engineering Physics (1987) from Cornell University, in addition to both an M.S. in Applied Physics (1989) and a Ph.D in Applied Physics (1993). He is actively involved in the Microscopy Society of America, holding positions on their committees—and winning their Burton Medal in 1998. His work has been published in numerous scientific journals and, since 2005, he has been employed with The National Institute of Standards and Technology. Founded in 1901 and now part of the U.S. Department of Commerce, NIST is one of the nation’s oldest physical science laboratories. Anderson works in their Surface and Microanalysis Science Division.