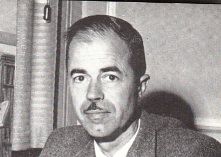 John Sherratt Guest joined the Lower School staff in 1933, but in 1942, the Navy called and he fought in the Second World War. John returned to the school in 1956 as Headmaster of the Lower School—and so began twenty years of dedicated service.

While dramatic changes were happening in the Upper School, the Lower School remained stable. Together with his wife, Cosie, John created a home-like atmosphere for the students under his care. He always taught, coached almost all Lower School sports at one time or another, and was an enthusiastic supporter of first teams to fifth teams. John's encouragement of drama and many of the other extra-curricular activities that made Lower School such a special place was a reflection of his concern for the boys' total welfare. He retired from Ridley in 1976 and died in 1995.