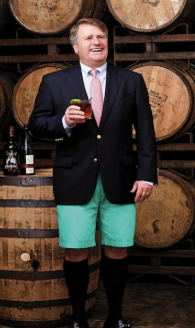 In its history, Ridley has been fortunate to have many Bermudians come to the school—among them, Malcolm E. Gosling, who was at Ridley from 1975-78, following his father Malcolm L. ’49. After Ridley, Malcolm attended Boston College, earning a degree in economics and then returning to Bermuda to work for the family business, Gosling Brothers.

Malcolm is the seventh generation head of Gosling’s Rum, which was founded in 1806. It is Bermuda's oldest business and the largest exporter of a Bermuda-made product. 2009 saw the introduction of Gosling’s Stormy Ginger Beer—to help the expansion of the “Dark ’n Stormy” cocktail—the national drink of Bermuda that features Gosling’s Black Seal Rum. The Dark ’n Stormy originated in 1920s Bermuda when sailors made their own ginger beer and chose Gosling’s rum to spice it up.

In 1985, Malcolm became a director of Gosling Brothers, overseeing domestic product and sales operations. He recognized that their Black Seal rum possessed untapped export potential and has since worked to nurture overseas markets. In addition to new products and marketing strategies, with a focus on the U.S. market, Malcolm has overseen the expansion of Gosling’s, taking it from a distinctly local product to a global brand available in 30 countries, including China.

Gosling’s has sponsored many sporting events and recent partnerships include the 2018 PGA Tour’s 2018 Honda Classic and the Kiel Week in Germany, the world’s largest sailing event. Gosling’s was the “Official Rum” and “Official Ginger Beer” sponsor at the 35th annual America’s Cup held in Bermuda in 2017, and its name its name is attached to sailing events in the U.S. and around the world.