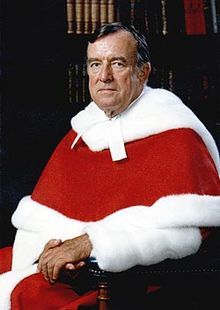 After his family moved to Winnipeg, Dickson attended the University of Manitoba and graduated with an LL.B. in 1938. He worked for two years in the investment department of the Great-West Life Assurance Company, then was called to the bar in 1940.

Before practicing law, Dickson enlisted in the armed forces during the Second World War and served overseas, where he was severely wounded in 1944. Upon his return to Winnipeg in 1945, he joined the law firm of Aikins, Loftus, MacAulay, Turner, Thompson & Tritschler. He also lectured at the Faculty of Law of the University of Manitoba for six years, until 1954.

In 1990, Chief Justice Dickson was made a Companion of the Order of Canada. During his early years on the Supreme Court, Dickson was typically known for siding with the opinions of Laskin and Spence, creating a voting bloc that has been known as the "L-S-D connection."

Having come from a corporate law background, Dickson often contributed to the judgements in that field. With the introduction of the Charter in 1982, he made many major contributions to the early standards of interpretation. Among his most famous decisions was that of R. v. Oakes where he first proposed the Oakes test; furthermore, in R. v. Big M Drug Mart he gave a broad interpretation to finding Charter infringement, and in R. v. Morgentaler he found that the prohibition of abortion violated a woman's security of person. The library of the University of Ottawa's Faculty of Law is named for him. It contains many of his papers and personal effects. Dickson died in 1998.