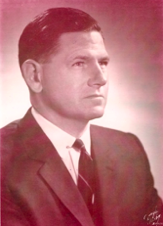 David MacLachlan attended Ridley from 1941-45 following his brothers Graham ’32, Campbell ’36 and Edward ’37. David was a member of the gym squad while at Ridley – he was the captain in 1945 and winner of the Cap’s Cup in 1945 – and, through his efforts, the Cap’s Cup boards in the Iggulden Gym were refurbished and brought up to date in the mid-1990’s.

David was an employee of 34 years for Dow Chemical, Past President of the Tourette Syndrome Foundation and an enthusiastic member of the Canadian Orpheus Male Choir.

He served as President of the Ridley College Association in 1990. In 1991, plans were underway for the formal organization and display of Ridley’s archives. David volunteered to help School Librarian and History teacher Paul Lewis with the initial appeal for funds, ideas and memorabilia. The appeals to foundations interested in historical preservation and private donors were so successful that the entire project was fully funded and endowed. The Archives was officially opened in May,1995.
The support of the MacLachlan family to Ridley is symbolized in the window in the Memorial Chapel dedicated in 1950 in memory of David’s brother Lt. Edward who was killed in World War II.

A life-long supporter and benefactor of Ridley, today the David A. MacLachlan Volunteer Award is awarded annually to Ridleians who choose to remain in service to Ridley after they have left the school. David died in Oakville, Ontario on December 5, 2000.