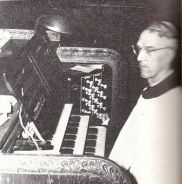 Coming to Ridley in 1923, Dr. Bett exercised a reverberating influence over the school for forty-one years as a talented musician and instructor of the performing arts. He filled the Memorial Chapel for its first forty years with glorious repertoires of organ music and the sounds of choral and congregational singing. He wrote brilliant pastiche music—often based upon Gilbert & Sullivan—in his “Football Songs” and his topical and local comic operettas.

In all the expressions of Ridley nostalgia, nothing is mentioned more frequently than the tradition of “the signing school.” In addition to eliciting school performance through the choir, glee club, hymn singing, and football songs, Dr. Bett created a love of music through musical appreciation classes. In one of his own compositions, he wrote: "With all our heart, we’ll play our part / We’ll give our best at her behest / For we belong to Ridley." Dr. Bett died in 1964.