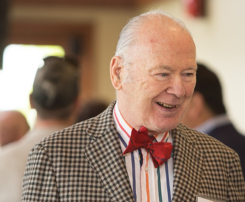 Attending Ridley from 1948-52, Norris and his brother, John ’58 were fourth-generation owners of Walker Industries—which was started by their great-grandfather as a stone-cutting business in Merritton in 1875. Today it is a Niagara-based company that owns and operates facilities across Canada and the U.S.

The company comprises a diversified group of companies, including aggregates and road building, emulsions and environmental services. In 2005, Norris and John retired, leaving Walker Industries to the fifth generation of the Walker family: David ’83, Geordie ‘90, Ian ‘90, the late Jennifer ‘82, Liz, Sheila, and Wendy ’85.

Norris, his family and Walker Industries are dedicated to community service and philanthropy in Niagara. A Rotarian and enthusiastic member of Chorus Niagara, Norris has devoted his time and resources for the betterment of Niagara and has assisted, among others, Brock University, Niagara College, the Niagara Health System, the Niagara Community Foundation, Knox Presbyterian Church, the Shaw Festival, and the YMCA. He is the lead donor for the St. Catharines Walker Family YMCA, Community Care of St. Catharines and Thorold, Hospice Niagara, the Niagara Symphony, and Ridley College.

Between 1991 and 1997, Norris and John donated 40 shells to the Canadian National Rowing Team. He received the Rotary Club’s highest honour, the Paul Harris Fellowship in 2009. In 2013, a significant donation supported the opening of the new Niagara Health System hospital and the Walker Family Cancer Centre in St. Catharines.

He has been a key leader in the development of Brock University and served as Chair of Brock’s Board of Trustees following many years of service on the Board. He was granted an Honorary Degree by Brock in 2001 and was named a Trustee Emeriti in 2009. In 2015, with the financial support of Norris and his late wife Marilyn, Brock University opened its transformative arts school in downtown St. Catharines, known as the Marilyn I. Walker School of Fine and Performing Arts.

In 2017, with the support of the Walker family and Walker Industries, Niagara College opened its Advanced Manufacturing Innovation Centre in Welland, Ontario, built to provide leading-edge equipment and state-of-the-art research facilities.