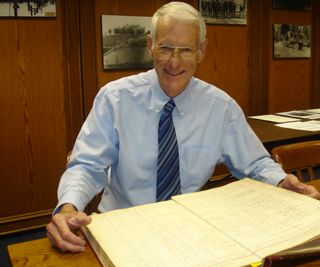 Originally hired at Ridley in 1971 as a teacher/librarian, Lewis also commanded the Cadet Corps, coached swimming and rowing, served as Housemaster of School House, founded and developed the Archives, tutored ESL students; and was involved in Acta, Reach for the Top, Duke of Edinburgh, and 4th Dimension programmes.

He authored a number of Ridley publications, including histories of the Cadet Corps, the Chapel, and the Prize Day awards and wrote often of the school’s history in The Ridley Tiger. He is the author of Ladies and Gentlemen, Mr. Harry Red Foster (1994), Historical Profiles from Victoria Lawn Cemetery (2006), Niagara’s Gorge Bridges: Marvels of Engineering (2008), and The History and Homes of Yates Street St. Catharines (2011).

In 2000 he co-authored, with Richard Bradley, Ridley A Canadian School. Lewis challenged, inspired and encouraged countless Ridley students during his 40 years of service to the school. He died in St. Catharines on November 30, 2011.